I also wanted to put in some puzzles with letters. But I generally have a lot of trouble designing puzzles with words. I tried putting in some word search and scrabble like puzzles, but they just didn't come out in any pleasing way. So i thought of using words in other genres I could work with. Nurikabe ended up being a nice choice. The trick of course was to make sure that the letters couldn't be all directly assigned to a word, because then the number of the island would be instantly known and it wouldn't be any different than a normal Nurikabe.
The design ended up really nice, with the word choice being related to the event and the puzzle.

In this puzzle the number clues are replaced by letters and the islands by words. The words that have to be placed are listed on the side. Each word has one letter given. The words have to be placed so that they can be read by moving horizontally and vertically along the squares. check the example below in case something isn't clear. 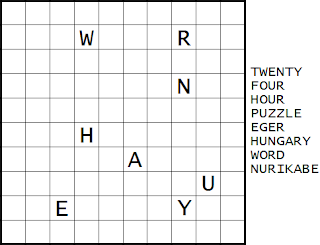