I'm posting 2 puzzles today. This is partly because I feel that posting only the Penta Pair puzzle would be a bit silly. They are both Pentomino puzzles. I had a few puzzle ideas ready for a test I was thinking of making, but that never really got off the ground. I might try that again next year as the theme is great. I put in some of the ideas in this test as I thought they were fun and it provided a few shape based puzzles.
The Penta Pair puzzle is a somewhat silly variant on the Pentomino Puddles puzzles. I have never been a fan of Pentomino Puddles puzzles, but I did like this twist on it though. I figured it would be a quick easy points, which you could get if you needed a short break or had a bit of time left at the end. I made a bunch of these puzzles and I think this was a really nice looking shape.
The Penta Line puzzle is just a simple pentomino grid variant. I hadn´t really ever seen the puzzles like this when I made it but have come across a few of them since I made it. This idea was the first draft for my LMI test, but I ended up going with a more traditional Pentomino puzzle type. I figured I could used it for this one now. I rated this puzzle a bit higher as the logic felt trickier to me than other puzzles.

Determine which 2 pentomino pieces can´t both be placed in the grid without overlapping. Rotating and reflecting is allowed.
I´ve added an example that uses tetrominos. 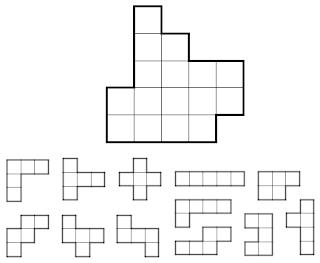 Place all 12 pentominos in the grid. Rotating and reflecting is allowed. The pieces aren´t allowed to touch eachother, not even diagonally. Certain parts have already been placed.
I´ve added an example with tetrominos. 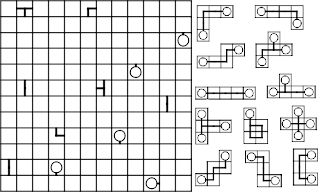