As I've had a lot of fun designing Ripple Effect puzzles in the last months, I couldn't resist putting one in. I know my puzzles are generally harder than most, so I gave this puzzle the most points. There was a Ripple Effect puzzle distributed at the WPC which was seemingly harder than mine, but it was designed in a different way than I do.
I have previously said I wasn't sure how to design puzzles with given numbers. Mostly my puzzles with given numbers will just have them to make the end of the path unique. This one is different though. I placed these numbers in the start of the puzzle and then start designing the cages so that these numbers would instigate much of the path. I think it worked out really nicely and was worth all the points in my opinion. 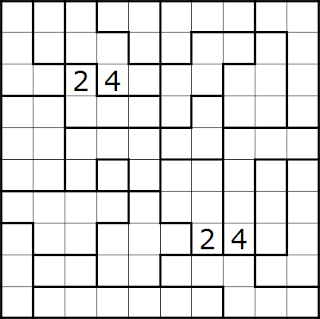