This is a puzzle type I've always liked. There isn't too much variation in it, but they're always just fun to solve. It's just the kind of logic you have to use that makes them fun to me. As the logic is different to most genres I figure it is always a good type to throw into a puzzle mix. I tried to add them to my puzzle test, but I think I ended up making the wrong choice in taking them out there. I think I should have taken the Outside Sudoku/Skyscraper set out in hindsight.
I have a feeling the minimal number of clues needed for a 4 dice set with 24 different letters, is 13 words. I have no way to prove this, I just always make the puzzle unique with the 13th word. I have a feeling someone with programming skills could verify this. It's one of those questions that pop up in my head once in a while. Johan de Ruiter already once confirmed my question about the existence of unique 4 by 4 kakuros.
This puzzle isn't too hard. The path through it runs very smoothly, which is why I didn't have it score too many points in the set.

On an unrelated note, I will be posting the Slitherlink Pattern Guide I had mentioned in Puzzle #51 later today.

You are given a set of 4 dice with letters on them instead of numbers. Each side has 1 letter on it. The given words can be rolled with this set of dice. Determine the orientation of the 4 dice.
The given example uses 3 dice. 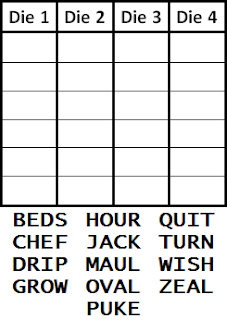