Last Tapa variant was considered an easy puzzle, but I don't think this one will be seen as such. This type I like a lot, but constructing them has caused me a lot of trouble. It's far harder to not run into impossibilities Tapa-wise as you have a set number of cells in each row and column. Normally the problem is uniqueness, here it is just having the possibility of a solution and then still having to worry about uniqueness. This one worked out well though. This variant will also appear at the WPC, which isn't overly surprising as the idea came from one of the constructers for the WPC.

In this variant you are to place the digits 1-6 instead of colouring squares. The digits will appear once in every row and column. The clues indicate the sum of the connected sections of digits around it. Different sums are seperated by at least one empty square. As in normal Tapa, the digits don't form a 2x2 square anywhere. 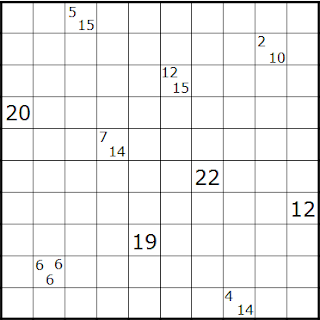