Here are the last few examples for TVC XI. They are a bit on the late side, but I had only 3 days. I did what I could. These genres were the trickiest to construct, so that's why they come last. I don't know how representative of the test they will be as they can be a lot harder than what I made now. I just needed puzzles that I could logically construct. I am also learning the logic involved in these genres.

First up is the Full Tapa. I had a lot of trouble to come up with an idea for this puzzle. When I settled on the 3 and 4 word lengths it slowly got started. I like how it worked out. Most of the puzzle runs on the word lengths, but you need to place the words to get to a unique solution. I assume it's easier than the actual test puzzle, considering the amount of points it's worth.
Secondly is the Power of Tapa puzzle. I don't think it's especially hard. Tried to get a mix of power and normal clues in, but didn't succeed as well as I had hoped. It's still a nice puzzle. The puzzle in the test is worth a the most points of all puzzles, so will most likely be harder.
Lastly the Meiosis Tapa. It's really tricky to construct because there are a lot of options for multiclue cells. Which is also why I avoided multiclue cells for the most part of the puzzle. I at least succeeded in implementing both types of division in the puzzle. It's not too hard, but as the points table goes, it could be of equal difficulty of the test puzzle.


6. Full Tapa
Use standard Tapa rules. Additionally all empty cells will be filled with the given words. All words have to be written across or down. Each word has to be used. All words formed by consecutive letters has to be in the list. No other words can be formed.

Use standard Tapa rules. Additionally each clue either represents a normal Tapa clue or an exponential operation, where the result of this operation will be used as a Tapa clue.
Note: 0^0 is undefined and won’t be used. Otherwise, a^0=1; 1^b=1; 0^c=0; d^1=d; e^f^g =e^(f^g). 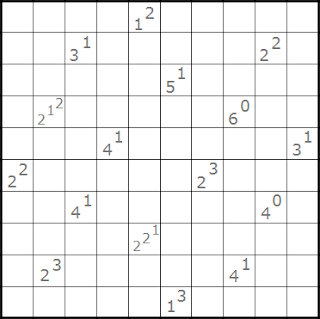 10. Meiosis Tapa
Use regular Tapa rules. Additionally each clue in a cell can undergo meiosis. This means that the clue can either be divided by two or split into two equal halves. These results are then used as Tapa clues. In case of a decimal result of division, each digit in the result functions as a Tapa clue. Multiclue cells may have divided and undivided digits together. Digits as a result of meisosis can't undergo meiosis again. 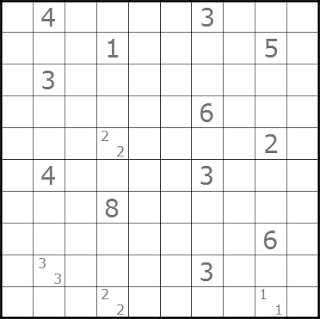