Even though Palmer also made a practise set, I figured I would still give it a go. I've been having fun making them, so I went at it again. I think it will help my solving in the end.
This time I started at the end of the booklet. this is partly because I had a nice idea for Tapa Tapa and partly because I am somewhat looking up to making a Make Room for Tapa and Wired Tapa puzzle. Can't really get those two started. Sadly I won't be posting my Tapa Tapa puzzle as I missed a rule regarding the Tapa cities. They can only have a segments of 1 cell around them, which I didn't do for my puzzle at all. Overall I'm happy with the puzzles, but I guess there's always room for a little improvement. I will post it after the test again, like I did before with a puzzle that broke the test rules. Next time I'll be more careful reading the rules and not just by checking the example.

The Roman Tapa is pretty basic. I think it is some good practise in breaking apart possible givens.
Sweeper Tapa has a nice opening. I could have put down TAPA everywhere instead of PARA, but thought that might happen in the test, so I figured I could just make it read my own nick everywhere. This puzzle is pretty hard though, so I put an easier variant of this puzzle in the second set. It will probably be better practise.
Tapa Like Loop is a fun genre, even though I question its Tapa-ness. I think it turned out a nice puzzle. I'm expecting this puzzle to go a bit bigger in the test.
Tapa Borders is not my best puzzle, especially in comparison to Palmer's. I had a nice idea for the basic structure of the puzzle, but I couldn't make it work completely the way I wanted to. Still helpful practise I think though.


The puzzles can be found below.


6. Roman Tapa
Use regular Tapa Rules. Additionally all Tapa clues are represented as Roman Numerals. A clue may represent one or more digits, written succesively. A VI clue for example, may represent a 6 or a 5-1 clue. Clues are not necessarily in increasing order. 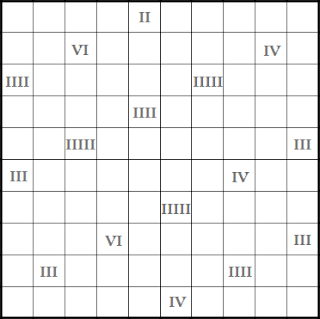 7. Sweeper Tapa
Use regular Tapa rules. After the wall is blackened no symbol may appear more than once in every row or column. 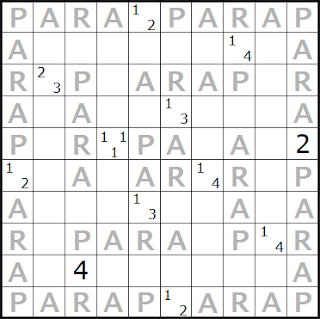 8. Tapa Like Loop
Draw a single continuous loop that connects the centers of cells horizontally and vertically. The loop may not touch or cross itself. The numbers in the grid indicate the amount of neighbouring cells visited by the loop. If there's more than one number in the cell, they should be represented by seperate loop segements. There is no 2x2 rule in this puzzle. 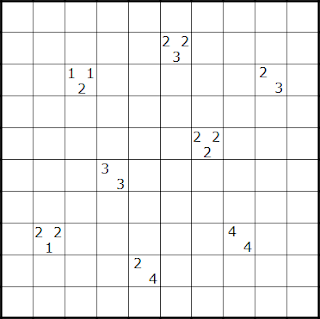 9. Tapa Borders
Follow regular Tapa rules. Additionally some borders may be bold or missing. When there is a bold border between 2 cells it means one of the two is coloured and the other is not. When the border is missing, it means they are either both coloured, or both not.