So this post will have 2 grids and 4 puzzles. This is somewhat the logical extension as the 2 genres don't actually normally look alike. Skyscrapers uses numbers and Easy as ABC uses letters. Still, they are somewhat similar as they both use clues indicating sight from the outside for a particular row or column. So there will be a grid that looks like a Skyscraper but is both and a grid that look like an Easy as ABC puzzle, but is both.

Rules for Easy as ABC


Skyscrapers Lookalike
This puzzle solves as a regular Skyscraper with digits 1-6. It's quite a tough puzzle.
This puzzle also solve as an Easy as ABC puzzle, but instead of letters you fill in the digits 1-4 in each row and column. 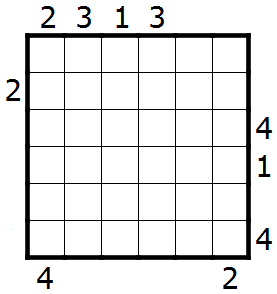 This puzzle solves as a regular Easy as ABC puzzle, with letters A-D.
It also solves as a Cryptic Skyscrapers puzzle with digits 1-6. Each letter stands for a different number and all occurences of a particular letter are the same number. This one is also the harder of the 2 puzzles. 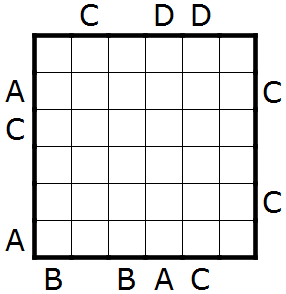