I've always liked Killer Sudokus. I enjoy solving the harder ones as well, which really need pencilmark eliminations if you want to find a nice logical way.
Competitionwise I usualy don't really find Killer Sudokus very interesting though. It's far too easy to turn out a quick Killer Sudoku. It's possible though to make the human element shine through a bit more. Those are the kinds of Killer Sudokus I find the most suitable for championships. I think that's why the Killer Sudoku in the latest United States Sudoku Championship was so much appreciated.
I think I managed to do the same with this Killer Sudoku. I made it a little while back for my girlfriend. The cages are to spell out an A four times. I am really happy with this puzzle. 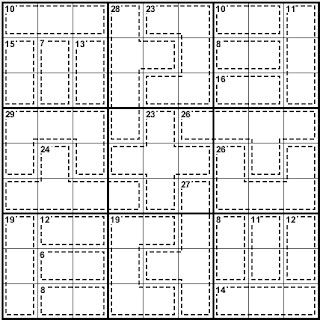