In the weekend of 7-8 September, the Czech Sudoku and Puzzle Teams Championships were held. The championship was held in Brno. The teams competed in a number of team and individual rounds over the weekend. The Sudoku event was won by the team of Michaela Bieliková, Matúš Demiger, Zuzana Hromcová and Jakub Ondroušek. The puzzle event was won by the Hungarian team of Zoltan Horvath, Pal Madarassy, Major Boglár and Zoltan Nemeth. Full results can be found here.
All Sudokus and puzzles of the championship can be found here. I also provided some of the Sudokus and puzzles for that event. This post will contain all my Sudokus.
This is the first time I actually provided Sudokus to a championship. Before the start of the Daily League I didn't really regularly write Sudokus. I think I'm getting a bit better on judging difficulty. I provided 3 easier and 3 harder puzzles. I also wrote an examples for each puzzle type. Two of the examples were also included in the championship. I think from the point values of the puzzles, my judgements of difficulty were pretty accurate.

I liked this layout of clues for an 8x8 grid. So tried to make it work. It's not too hard as a low amount of clues doesn't allow for too much freedom as you need to still have the clues interact to get a unique puzzle out.

Rules:
In this Sudoku, the digits in the grid indicate the digits that have to be placed in the 4 cells surrounding it. 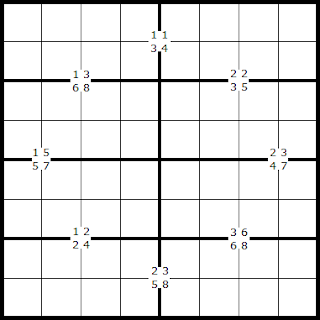 I generally try to avoid 3 digits for a single direction in Outside Sudoku. I like this clue pattern therefore. It's not a hard puzzle, but it wasn't meant to be. I find it somewhat hard to make a harder puzzle in this type.

Rules:
In this Sudoku, digits on the outside have to appear in that row or column in the first blackbordered region seen from that side. 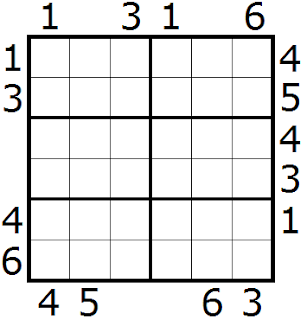 Puzzle 2
3. Consecutive Clone Sudoku (3 points + 14 points)
When I wrote this type for the Daily League it seemed to be well received. So I figured I'd write one for the championship too. I employed a CZ theme for the clues. I think this one is easier than the one I wrote for the daily league.
Rules:
In this Sudoku, digits in the same place in both grey figures have to be consecutive.
Puzzle 1 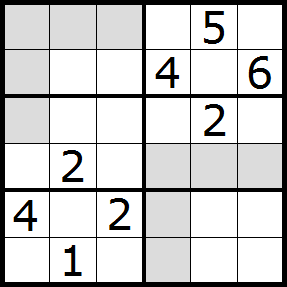 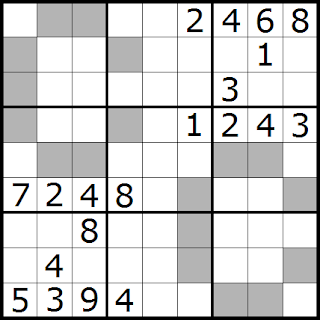 This is the first time I wrote this variant. As it's a difference puzzle it always needs at least one clue inside the grid. So I went with a 1 through 9 diagonal, which I have employed in a number of my puzzles. It also leads to a simple opening with some of the clues. But after that it becomes a bit harder and it's important to find the right clues to use.
Rules:
In this Sudoku, digits on the outside indicate the difference between the highest and lowest digit in the first three cells seen from that direction. 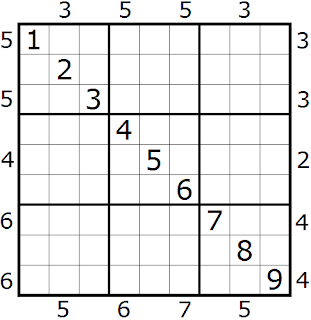 I like this variant. I generally like sum variants. Adding the Jigsaw constraint helps reduce the number of clues needed too. I tried to use little clues, so the Sudoku bit also came into play more and it didn't turn into just a sum puzzle. I liked how it worked out.

Rules:
In this Sudoku, the numbers on the outside indicate the sum of the first X digits in that row or column from that side. X is always indicated by the first digit seen from that direction. 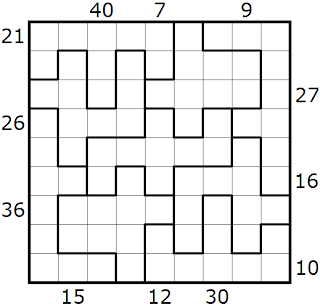 This is another variant I like. It's actually the first variant I wrote for the Daily League. At first I set out to make an easier puzzle than the one in the Daily League. But when I was done with the design, I'm not sure if that truly worked out. I just kept putting in things I thought were nice and often when I think something is nice, it also means it's tricky. I at first made an error in the clues, so my apologies to some of the testers for trying to solve an unsolvable puzzle.

Rules:
Numbers on the outside indicate the distance between the 2 indicated digits in that row or column. The order of the numbers is indicated and have to be placed left to right or top to bottom.
Posted by Para at 02:42