This week a combination of two variants I like. X-Sums Sudoku is a genre that works really well with Jigsaw Sudoku, so I figured it would just as well work with Toroidal Sudoku. It's a bit tricky though as it's much easier to overlook that a certain digit already appears in a region. The puzzle is probably on the harder side, but I don't think any of the logic is overly hard. It's just tricky to keep track of everything with the Toroidal regions. I did add a few clues that aren't necessary for uniqueness. But there were clues planned there to keep the symmetry, but the puzzle proved to be unqiue without needing to put any there. They don't really ruin any of the logic, just create a few shortcuts. 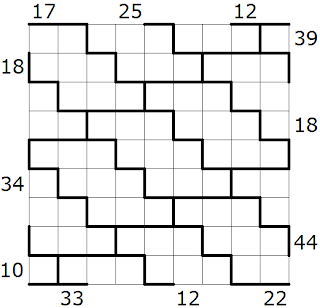