I based this of a puzzle I've seen as an Instructionless Sudoku I've seen before. I don't remember where it was. As I remember it, it was a Sudoku, where in each nth nonet all differences n were marked (e.g. in nonet 1 all differences of 1, in nonet 2 all differences of 2). This puzzle has the same concept, that in each nonet all instances of a particular difference are marked. Except the differences aren't ordered and you have to figure out which nonet corresponds to which difference.
I hope the explanations of the rules are clear. If someone has a better way to formulate them, I'd appreciate it.
I think if you understand how the basics work, it shouldn't be too hard a puzzle. I've written better Sudokus and I think it can be done more elegantly. But overall I like how it turned out. I hope people enjoy it. 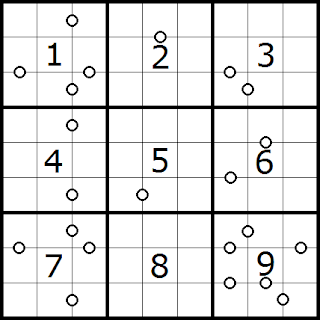