Here are the first 4 practise puzzles for TVC XV. I will try to get the other 6 ready for tomorrow, but it can be that this week the practise puzzles come in three instalments. As always certain types cause more issues to construct than others. Especially the Twopa is pretty annoying to construct. I also had some trouble getting the No-Islands started, but I think that one turned out nice.

The first puzzle is a Hexa Tapa. I expect the puzzle in the contest to be a larger puzzle. I think in smaller size they really aren't generally very interesting, so I somewhat expect Serkan to go big and do something nice with it. I don't think this puzzle is too hard, but it isn't too bad. The two 1s on the outside were clues I'd have rather left out, but were necessary for uniqueness.
The second puzzle is a Tapa Skyscrapers. And I guess it's appropriate it's second as it's all 2s. I actually made the Kakuro-Style first and figured I could do the same with this genre. I think this one is the nicer of the two puzzles. It was at least fun to construct.
The third puzzle is a Kakuro-Style Tapa. It has the same inside clues as the Tapa Skyscrapers. I spend ages trying to construct this one, but I couldn't get it out the way I wanted it. People who are familiar with my constructing, know that I'm not all too happy with those 2 inside squares. I just liked how the opening worked and after many tries this was the nicest way to finish it.
The fourth puzzle is a No-Islands Tapa. I had some trouble getting this one started. It also took a little while to get all the constraints in correctly, so my first few tries I would realise too late that I had already broken a constraint or two. If you want to know which constraints, look a bit at the Cave/Corral/Bag genre; that should give you some ideas. 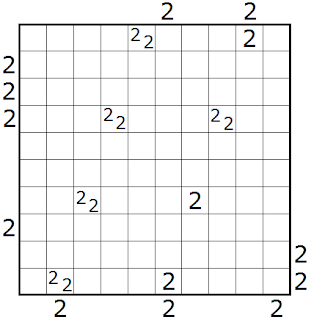 Follow regular Tapa rules. Additionally, Numbers in black cells indicate the number of separate blackened blocks in the corresponding directions. For any direction provided with a clue, the separate blocks should be of different length. 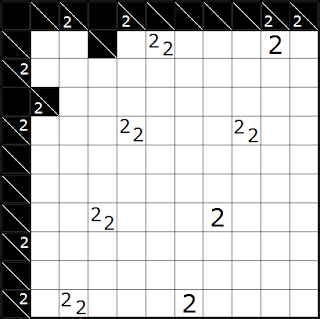 Follow regular Tapa rules. Additionally, all cells must be connected orthogonally to an edge of the grid. 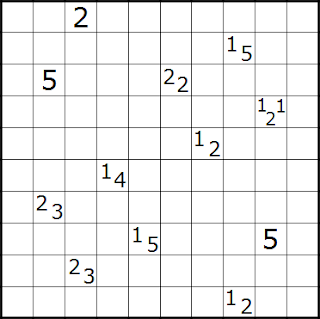