I was debating on whether to finish the other 3 types or posting these already, but figured I might as well post them now. I'm having some trouble designing certain variants. Both Double Back and Twopa are tricky to get right. The Twopa came together when I gave up on making the clue layout symmetric. It was just too much trouble. I will try to post the rest later today. I hope these puzzles are useful though.

The first puzzle is an Outside Tapa. I don't think this one is as nice as Serkan's puzzle from TVC VII but I think it's nice none-the-less. The variant isn't as influential in this puzzle, but has some points that should be important for the solve. But a few of the outside clues are purely to settle uniqueness.
The second puzzle is a Total False Tapa. This variant seems to always require a lot of clues. When I was done with the design I actually went out to edit the puzzle a bit, replacing multiple clues with 8's as the actual value of the clue was unnecessary, meaning that an 8 would work just as well. I think it makes the puzzle a bit nicer a solve. I think the end of the solve it trickiest.
The third Puzzle is a Twopa. It's a really tricky type to design, but I don't think the solve is particularly challenging. The main problem here is that you can't just add clues wherever you want as it might not work for both puzzles or it might not solve differently for both puzzles. But at least neither of the puzzles is solvable completely without solving the other grid.

Follow regular Tapa rules. Additionally symbols on the outside indicate the relations between corresponding rows/columns regarding the number of blackened cells. 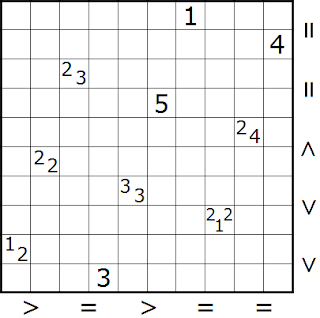 Follow regular Tapa rules. Additionally, all given clues are wrong. This means that the number of given digits is wrong and all digits are different from the given digits. Correct clues cannot contain a zero. 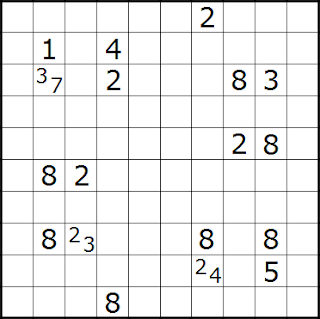 Follow regular Tapa rules. This Tapa has several solutions. But if you consider both grids together, each has a unique solution. In both solutions each clue has to behave a little bit different. This means that in a multi-digit clue, some of the clues can behave the same but not all of them.