This week again an easier puzzle, at least it should be. I think the variant idea is pretty simple and might have been done before. I debated for a while whether or not to have the knights to move from a grey square to 1 through 9 and then back to a grey square, or to do it the way I did now. I thought this was a nicer way, as I thought the last move from 9 to a random number seemed a bit odd. The design was a bit tricky as it was easy to forget to check all numbers and whether it was still possible to connect the paths. The puzzle is fun although it didn't turn out completely the way I wanted. But as it had to also be a unique Sudoku, it worked out good. I only needed to give 12 clues, which I wasn't expecting. The pattern of 12 was the opening lay out, but I figured I would have to add some more to eventually get the Sudoku unique.
I hope you all enjoy it.

In this Sudoku two knights are placed on a grey square with a digit 1. The knights then follow a path of knight's moves towards at least one of the other grey squares with a 9. The path travels through all digits 1 through 9 in order, including the digits in the grey squares. Each 9 should be reached by at least one knight. 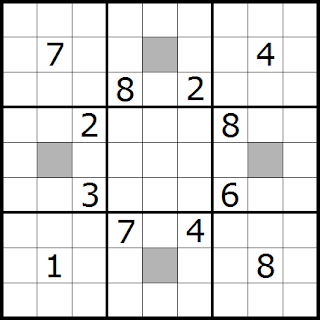