Hello from Vancouver. Currently travelling before the WPC in Beijing. Need to be relaxed when I arrive there. Although maybe adding a small jetlag isn't totally the smartest thing. I was better located in Australia for that.

I wasn't sure if I could post any puzzles this week for the upcoming TVC XVI at Logic Master India.. I wrote a few puzzles on the plane, so I figure I'd share those. I hope they are of some use to people. Hopefully I will be able to compete in the last few days of the CTC and the last TVC. We will see. Everyone have fun at least.

There are four Tapas in this post.
The first puzzle is a Symmetric Tapa. This rule is very influential in the solve, so you really don't need many clues if you place your rectangles smartly. This one has four clues, but really shouldn't be that difficult a solve. I made it 11x11 as that way the rectangles would less likely share an edge if I placed all dots on grid points.
The second puzzle is a Toroidal Tapa. I like this variant. It's a bit trickier to design as you need to set a lot more blocks to make sure you can guide the wall where you want it to. I think this is a genre that can always use some practise, especially with looking around the edges of the grid. This puzzle is 12x12 as I liked this pattern of givens.
The third puzzle is a Transparent Tapa. This is the only genre that hasn't previously appeared on a TVC, so I figured I should at least make one of these. Although people can find a few of them on Prasanna Seshadri's blog. Oddly enough this rule change only means there is one clue that is invalid in normal Tapa. This one is also 12x12. I made an opening and then I noticed it would work more effectively in the corner of the grid. But to make a nice pattern of givens it would be better for the grid to be 12x12.
The fourth puzzle is a Alternative Tapa. This is the hardest of the four puzzles. This is not caused by the variant, as it's not overly influential in the solve. But the normal Tapa bit is pretty challenging and should give you all a bit of a challenge. Although maybe with the CTC you've had enough of those already. This one is 11x11 as it worked nicely with the TVC XVI pattern of letters.

Enjoy and have fun this weekend.

Puzzle can be found below.

Follow regular Tapa rules. Part of the wall should have rotational symmetry in the largest possible rectangle having a black dot in the centre. 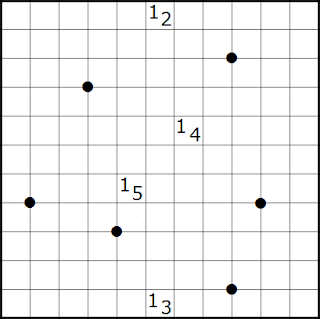 Follow regular Tapa rules. Additionally the grid is wrapped around the four edges. 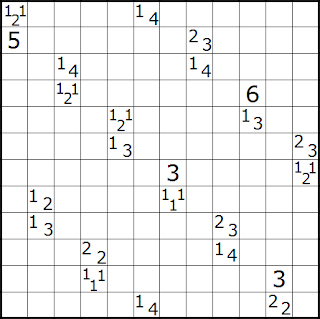 Follow regular Tapa rules. In this puzzles the Tapa clue cells can also be coloured. The means that every clue cell is valid for 9 cells instead of the normal 8 cells. 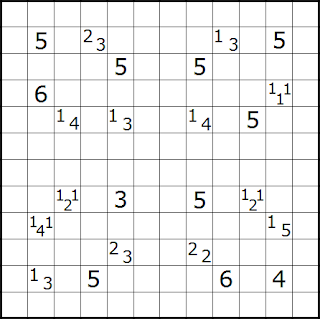 Follow regular Tapa rules. For each set of identical letters, exactly one is coloured. The rest remain white. 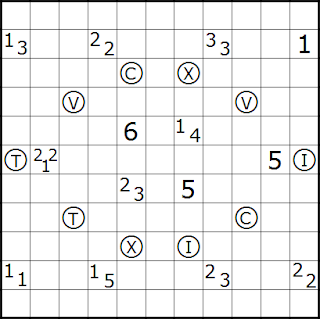