On first thought I was planning to make number 8 a Ken Ken puzzle. The problem is that I am not very good at making nice ones. After trying to find something else, I turned to Island. I figured all the same numbers for an Island puzzle could be interesting. I think the result worked out nice. It's probably the easiest Island puzzle on this blog so far, so I'm hoping people will appreciate the genre a bit more with this one as the difficulty of the previous ones has broken up most people so far. I guess I need to find a better way to judge the difficulty of these puzzles. I figured it was a relatively simple idea I used, but I think it wasn't.

8. Island
Fill in some cells to form a single island. The cells with numbers are part of this island. The numbers indicate how many unnumbered cells can be reached from that cell by moving horizontally or vertically. Numbered cells block access. 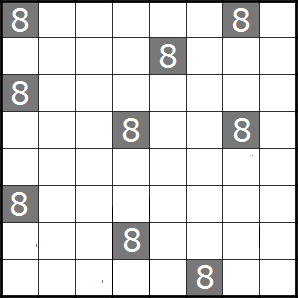