Even though it's supposed to be a lucky number, it didn't bring me much luck in construction. I've tried using this number in numerous genres, but none of them really worked out. I wanted to add a second Sudoku puzzle and I went to Arrow Sudoku as I always enjoy them. It still took a long while to find a nice layout which could use only 7 clues. I'm happy with the end result. Difficulty-wise I find it hard to say, but I would call it challenging at least.

Place the digits 1-9 once in every row, column and 3x3 area. The digit in each circle equals the sum of the digits along its arrow. Digits are allowed to repeat along an arrow as long as it doesn't conflict with standard Sudoku rules. 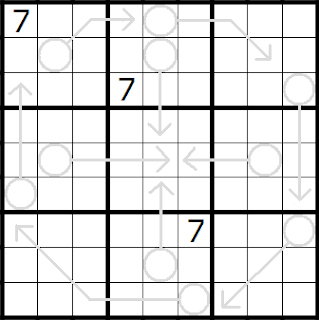