I know, it's not New Years in all of Australia yet. Countries with multiple time zones are annoying.

I thought 4 would be a nice number to use in tapa. I tried to make a Maths Tapa with operations. But I realised that with only 4s, I had a lot of trouble creating openings. So instead I changed it a little and basically turned it into a mix between Tapa and Killer Sudoku. It doesn't add very much to the genre as many of the clues can be figured out instantly. I still like how the puzzle turned out though. Medium difficulty. Figuring out the opening is probably hardest.

Colour some cells to create a single contiguous shape. The shape can't have any 2 by 2 coloured areas. The clues in the grid tell you how many consecutive cells around it have to be coloured. If there's more than one digit in a cell, the groups of cells have to be seperated by at least one empty cell. Cells with clues remain empty.
Additionally, replace each question mark by a positive integer. Each clue square has 4 squares coloured around it. 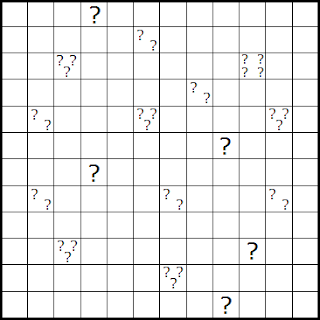