The first one is a Skyscrapers Sudoku. Skyscrapers is one of the most used Latin Squares types. Pretty much every WPC I have been to has had at least one. It's a simple idea that can lead to a lot of different puzzles. I think it's the first time I've actually written a Skyscrapers Sudoku, although I have written many Skyscrapers. You can more easily run into unforeseen uniqueness issues with the Sudoku regions added. I had a few puzzles end up having no solutions. I had to tweak the layout a bit. I originally had 4567 on the left side and 456 on the right side, but nothing nice came out of that. The final puzzle should be fun to solve.

In this Sudoku digits represent Skyscrapers of that height. Clues on the outside indicate how many skyscrapers are visible in that row or column when looking from that side. Larger digits block the view of smaller digits. 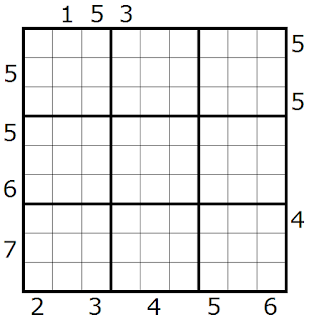