This is the twelfth practise puzzle for this year's UKPA Open.

This was the simplest choice for the pentomino division. I like these puzzles. I wrote a few for the Dutch puzzle association, tow of which have appeared on the site so far. Most these were tricky though, so I tried to keep the puzzles a bit easier. There's a few little insights needed to solve this puzzle, but I think it solves nicely though.

Divide the grid into pentominos, so that no two pentominos of the same shape share an edge. Rotations and reflections are considered the same shape. Letters in the grid indicate that this cell is part of a pentomino of that shape. Pentominos may contain multiple letters or no letter at all. 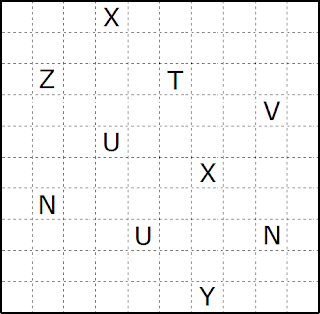