This puzzle is the one that started the whole idea of the count down. I was trying to make a Killer Sudoku with all the same sums. When I had seen a few people post a Christmas contest this year, I figured I could make a nice New Years countdown set. That's when I focussed on making one with all 10 cages.
I had first tried to make one with 1-9 but i couldn't get that right. When I attempted it with 0-8, it instantly became more productive. This puzzle is on the harder side, but I don't think it will stump the better solvers.

Place the digits 0-8 once in every row, column and 3x3 area. The numbers in the dashed area indicate the sum of the digits in that area. No digits are repeated within any dashed area. 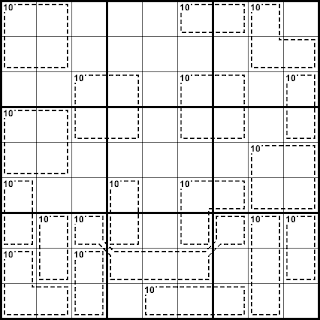